AWS Snapshot Vs. Backup | Which Will Safeguard Your Data Better 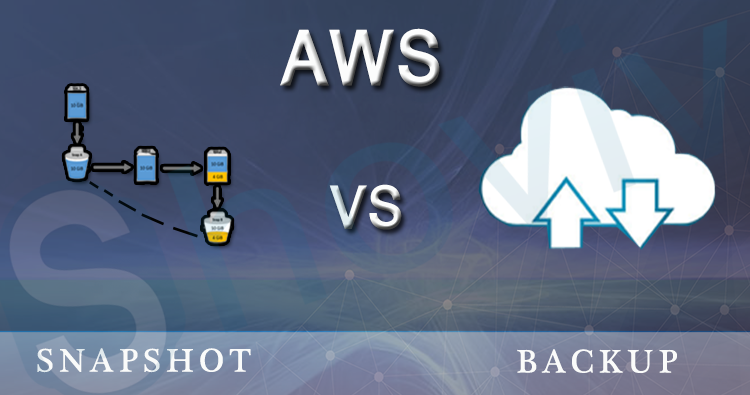 AWS Snapshot Vs. Backup | Which Will Safeguard Your Data Better

AWS (Amazon Web Services) is Amazon’s complete cloud computing platform, which comprises infrastructure as a service (IaaS), platform as a service (PaaS), and packaged software as a service (SaaS) products. It was founded in 2006 as an extension of Amazon.com’s internal infrastructure for handling its online retail operations. Recently, I have come across several scenarios where users are confused between AWS snapshot Vs. Backup.

Here in this write-up, I will differentiate AWS Snapshot and Backup and will suggest you the better option to protect your AWS data.

What is AWS File Backup?

A web server backup is just a duplicate of the files on a system or web server. When you generate a backup, it creates an archive of part or all of your server’s documents.

These files, which are retained in an archive, are stored in different locations than the original resource, making them more reliable in document corruption or data loss.

The main difference between a backup and a snapshot is that backups are separate copies of data, whereas snapshots are combined copies of data. They’re not linked to your virtual creator. That implies they won’t provide you a whole online device snapshot to restore just yet, but they will let you restore certain files/folders that may have been compromised.

Backups, unlike snapshots, can be readily moved to the cloud or an off-site data center.

When Should You Use AWS Server Backups?

If you want to acquire long-term data protection, you should constantly consider backups.

When many tasks are hosted on a server, you can back them up and restore them independently without affecting other projects.

Backups aren’t just useful for ensuring the survival of a business. They can also do functions that photographs simply cannot. Consider image-level backups. They offer a wide range of recovery options and can even recover complete virtual machines or apps.

In less critical cases, incremental backups can be used to only support the data that has changed recently, allowing you to save time.

What is a Snapshot, exactly?

A Snapshot is a brief “snapshot” of your web server’s data system that lasts for a specific amount of time.

This image of your document system is frequently used to recover complete web servers in the event of data loss or corruption.

In some situations, Snapshots can be quite useful, and they’re especially useful when paired with Server Backup.

When Should You Use Snapshots?

Even if photo backup has its drawbacks, the benefits are substantial. If both on-site and off-site backup solutions are used, it is considered active service for system backup.

Snapshots can be an excellent solution for data backup and protection if your startup or company already has these storage solutions in place. They are, nevertheless, best suited to short-term conditions.

A backup is a copy of a file or other data that is stored in an archive. When you start a backup, it will replicate your data. These duplicates are kept in a different place. Depending on the amount of data you’re backing up, backup operations will take longer.

Snapshots are a quick “picture” of the documents system on your web server. This image covers everything about the webserver, including the time it was taken. Snapshots can be used to restore web servers to the state they were in at the time the Snapshot was taken.

To summarize, the following are the main differences between a server/file backup and Snapshots:

Both Snapshots and backups have their advantages and disadvantages. Nonetheless, it’s normally advised to go with backups if you require long-term insurance coverage. Snapshots are made for temporary usage as well as storage. They are usually only valuable if you need to change to an extremely current variation of your server on the very same framework.

I hope now you are well aware of the AWS Snapshot and Backup. As discussed in the above post, backup is the best option to safeguard your priceless data. Shoviv IMAP Backup and Restore tool is the best option; click here to know more about AWS backup tool features.