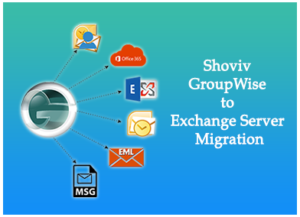 Despite the immense popularity which has been gained by other emailing platforms over the year Novell GroupWise is able to sustain it continuity in services like easy administration and vast security features which do not make Novell GroupWise an ideal platform for the users. However, with the launch of Office365 by Microsoft has made it most accepted emailing platform which demand and popularity are increasing rapidly due to which many users are shifting their domain to Office365. Herein this blog, we will discuss the reason which has made Office365 a better emailing platform and the methods to convert GroupWise to Office 365 migration for better services and features.

Here are some reasons which have made Office 365 an outstanding email client.

Though the GroupWise itself is an amazing email platform but the services which Office365 provides it users with are overwhelming and help the user to enhance their business and organization.

How to migrate GroupWise to Office365?

The GroupWise to Office365 is the professional software solution which not only is secure but can effortlessly export GroupWise to Office365 without using any additional tools. The software is safe and secure which comes with the enhanced features which swiftly process entire GroupWise 2018 to Office 365 without damaging or altering the original data. The software also shortens the process by offering a direct method to export all data from GroupWise mailboxes to PST format.